(Seychelles News Agency) – The Seychelles Coast Guard has new powers to fight illegal activity in the island nation’s waters after a new law came into force. President Danny Faure assented to the Defence (Amendment) Act last Tuesday after it was approved by the National Assembly.

The new law provides a legislative framework to govern the activities of the Seychelles Coast Guard. Previously the Coast Guard carried out its duties under other laws, including the Seychelles Fisheries Act, the Maritimes Zones Act and the Penal Code.

When presenting the bill to the National Assembly, Vice President Vincent Meriton said it would give the Coast Guard more powers, duties, authorities and immunities as other countries have.

The Seychelles, an archipelago of 115 islands, has a total land area of 455 square kilometres spread over an Exclusive Economic Zone of 1.4 million square kilometres which is slightly larger than South Africa and about six times the size of the United Kingdom.

This presents a challenge when it comes to monitoring illegal activities in the Seychelles’ waters. This year three Sri Lankan-registered fishing boats were intercepted by the Seychelles Coast Guard on suspicion of illegal fishing. 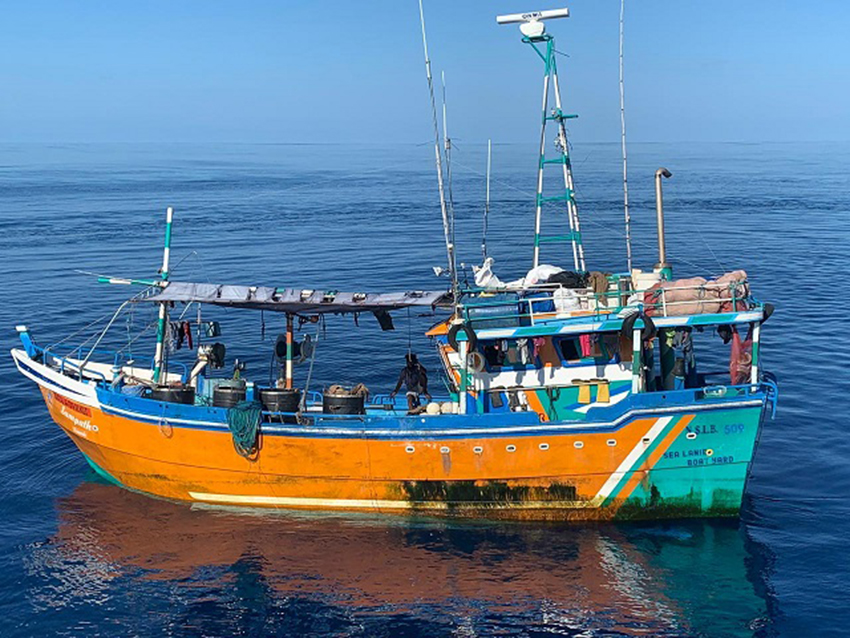 The vessel with six fishermen aboard was spotted by the Seychelles Air Force Dornier aircraft to the east of Denis island in April. (Seychelles People’s Defence Forces) Photo License: CC-BY

It also gives them the right to engage in hot pursuit of a vessel and to dispose of any fish, article, device, goods, ship, aircraft or any other item that is connected to the commission of an offence.

Most members who intervened during the debate supported the new provision, which calls for a more draconian approach to deal with vessels caught committing criminal activities in Seychelles EEZ.

“Any vessel that is caught or suspected of committing an offence is dealt with there and then and we need to empower the agencies that are patrolling our waters to take such actions too,” a member of the United Seychelles party, Sebastien Pillay.

The Leader of the Opposition, Wavel Ramkalawan, said there was evidence that people from neighbouring islands were carrying illegal activities in the waters around some islands far from the main island Mahe.

He said that “we need to send a strong message to them, that they can’t do this anymore. We will arrest them, and they will lose everything, and they will have to return home by plane.”

Twenty-three members voted in favour of the new law, no one voted against and five abstained.

A member of the Linyon Demokratik Seselwa (LDS), Clifford Andre, is a former coast guard officer who abstained. He told SNA that although he supported most of the bill, he was not in favour of the provision which gives the coast guard the power to dispose of the vessel and articles found on board.

He said this might lead to abuse of powers.

The Seychelles Seatizens fish identification website and database is a free to use information resource on marine species in Seychelles, and currently provides information on 496 species and continuing to expand its portfolio. Species can be searched by scientific, English, Creole and French names; by taxa or by image and the site can be visited HERE!